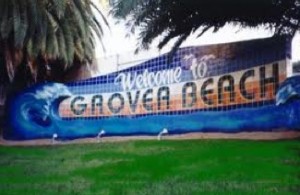 Grover Beach is a city in San Luis Obispo County, California. The population was 13,156 at the 2010 census, up from 13,067 at the 2000 census. This city was originally called, “Grover City”. The name was changed by popular vote in 1992 to emphasize the seaside location.

Grover Beach was originally founded on August 1, 1887 by Dwight William Grover. This occurred when he filed his plans at the San Luis Obispo County Court House and eventually founded what was to be known as City of Grover City.