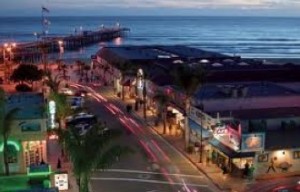 Pismo Beach is a popular beach town located in the Central Coast area of California. The name Pismo comes from the Chumash word for tar, which was gathered from tar springs in Price Canyon near Pismo Beach. It was a valuable product used to caulk canoes.

The first wharf at Pismo was built in 1882, followed by a fishing pier built in 1924. After it suffered considerable storm damage, it was replaced and over the water.